Amplification is the control of a larger output quantity by the variation of a smaller input quantity. Such amplification can be performed by saturable reactors connected either in series or in parallel. This set up consists two such reactors, AC and DC power supply, two meters for load and control currents and a fixed value RL. The set up to study the characteristics of series - parallel connected magnetic amplifier, has two identical gate and control windings wound upon split deltamax cores, which are placed together to form two saturable reactors. A compensation winding is wound between the gate windings and connected with control windings for proper phase correction. Sockets are given to connect the amplifier gate windings in series parallel mode, while control windings are joined together with compensation windings internally. A control bias battery in form of regulated DC 0-3Volt supply with a DC mAmeter to read IC, and current limit resistance is provided to study control and saturation characteristics.The polarity of DC current applied to control winding may be changed with polarity selector. Two fixed value (20 and 100 OHM) RL are given to study the effect upon transfer characteristics, with stepped down fixed AC supply with an AC ammeter to read load current IL.

To study input-output characteristic of a magnetic amplifier 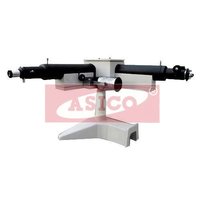 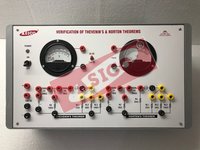 Verification Of Norton's and Thevenin's Theorem